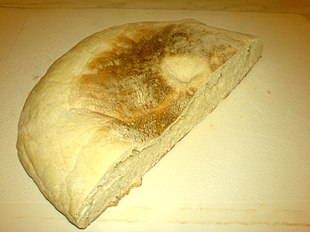 A stottie cake or stotty (Northumbrian: stottie kyek) is a type of bread that originated in North East England. It is a flat and round loaf, usually about 30 cm in diameter and 4 cm deep, with an indent in the middle produced by the baker. Elsewhere in the world, bread considered similar to the stottie is known as 'oven bottom bread', though this term is a relative newcomer, given that, prior to the widespread use of cast iron ovens with shelves, ovens were built of brick and had only the bottom available to bake on. One chief characteristic is the heavy and dough-like texture of the bread. Though leavened, its taste and mouth-feel is heavy and very reminiscent of dough. It is heavy and dense because it has only been allowed to prove once rather than the usual twice. This indicates that its origins lie in the breads used to 'test' ovens, and that it may be related to similar breads baked elsewhere in Europe for the same reason. Anecdotal evidence also suggests that some stotties were made with the offcuts of dough when all of the required loaves had been baked.more