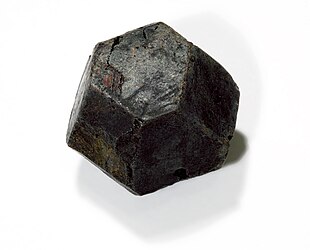 Betafite is a mineral group in the pyrochlore supergroup, with the chemical formula (Ca,U)2(Ti,Nb,Ta)2O6(OH). Betafite typically occurs as a primary mineral in granite pegmatites, rarely in carbonatites. Defined by the B-site atom Ti, Atencio et al.(2010) combined and considered the ideas portrayed in (Hatert and Burke)(2008) and a modernization of (Hogarth)(1977) system for nomenclature of pyrochlore and betafite in order to further rationalize the naming process of this grouping of minerals. Therefore, Atencio et al. (2010), states that only two of the mineral species that were formerly recognized under the previous nomenclature system of betafite in Hogarth (1977) are now recognized. They are oxyuranobetafite and oxycalciobetafite. Now the term betafite is a synonym or varietal group name under the pyrochlore super group (Christy and Atencio 2013). ]]more