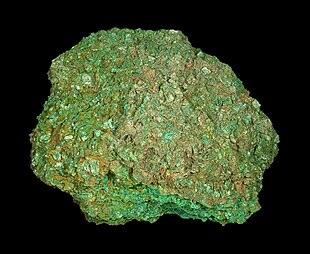 Népouite is a rare nickel silicate mineral which has the apple green colour typical of such compounds. It was named by E Glasser in 1907 after the place where it was first described (the type locality), the Népoui Mine, Népoui, Nouméa Commune, North Province, New Caledonia. The ideal formula is Ni(SiO)(OH), but most specimens contain some magnesium, and (Ni,Mg)(SiO)(OH) is more realistic. There is a similar mineral called lizardite (named after the Lizard Complex in Cornwall, England) in which all of the nickel is replaced by magnesium, formula Mg(SiO)(OH). These two minerals form a series; intermediate compositions are possible, with varying proportions of nickel to magnesium.more