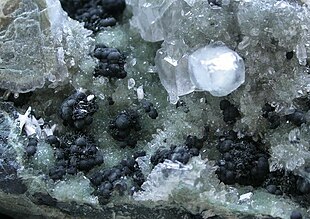 Julgoldite is a member of the pumpellyite mineral series, a series of minerals characterized by the chemical bonding of silica tetrahedra with alkali and transition metal cations. Julgoldites, along with more common minerals like epidote and vesuvianite, belong to the subclass of sorosilicates, the rock-forming minerals that contain SiO4 tetrahedra that share a common oxygen to form Si2O7 ions with a charge of 6- (Deer et al., 1996). Julgoldite has been recognized for its importance in low grade metamorphism, forming under shear stress accompanied by relatively low temperatures (Coombs, 1953). Julgoldite was named in honor of Professor Julian Royce Goldsmith (1918–1999) of the University of Chicago.more