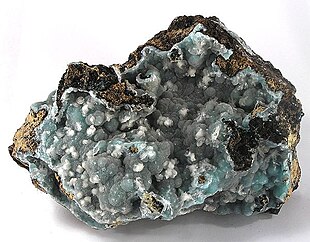 Hemimorphite, is Zn4(Si2O7)(OH)2·H2O, a component of calamine. It is a sorosilicate mineral which has been historically mined from the upper parts of zinc and lead ores, chiefly associated with smithsonite, ZnCO3. They were assumed to be the same mineral and both were classed under the same name of calamine. In the second half of the 18th century it was discovered that these two different minerals were both present in calamine. They closely resemble each other.more