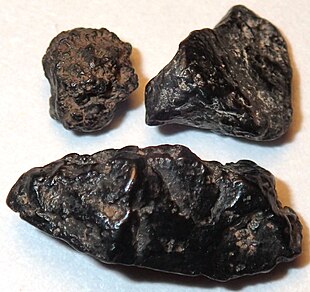 Guyanaite (CrOOH) is a chromium oxide mineral that forms as an intergrowth with other chromium oxide minerals known as bracewellite (CrOOH) and grimaldiite (CrOOH) as well as eskolaite (Cr2O3) which in early findings were nearly indistinguishable from one another. These oxides formed so closely as intergrowths with one another that they were initially, and erroneously, identified as a single definite mineral previously known as merumite. Because of its complex history and the previously undiscovered nature of these chromium oxide polymorphs, the relevance of any information found in many early experiments involving the mineral formerly known as merumite in regard to guyanaite is unknown and it is implied that in any further reference of merumite it will have been composed of a mineral assemblage including guyanaite. The rare occurrence and complexity from intergrowth of naturally occurring guyanaite hinders experimental work, leading to laboratory synthesized samples which help to better experiment with the minerals.more