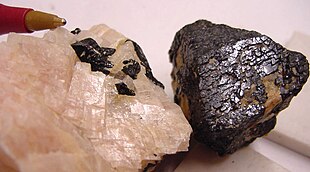 Gahnite, ZnAl2O4, is a rare mineral belonging to the spinel group. It forms octahedral crystals which may be green, blue, yellow, brown or grey. It often forms as an alteration product of sphalerite in altered massive sulphide deposits such as at Broken Hill, Australia. Other occurrences include Falun, Sweden where it is found in pegmatites and skarns, Charlemont, Massachusetts; Spruce Pine, North Carolina; White Picacho district, Arizona; Topsham, Maine; and Franklin, New Jersey in the United States.more