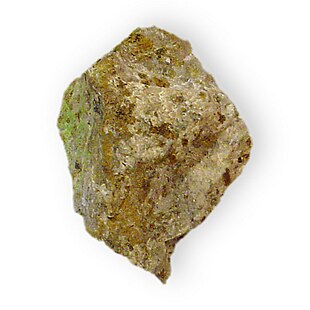 Arthurite is a mineral composed of divalent copper and iron ions in combination with trivalent arsenate, phosphate and sulfate ions with hydrogen and oxygen. Initially discovered by Sir Arthur Russell in 1954 at Hingston Down Consols mine in Calstock, Cornwall, England, arthurite is formed as a resultant mineral in the oxidation region of some copper deposits by the variation of enargite or arsenopyrite. The chemical formula of Arthurite is CuFe23+(AsO4,PO4,SO4)2(O,OH)2•4H2O.more