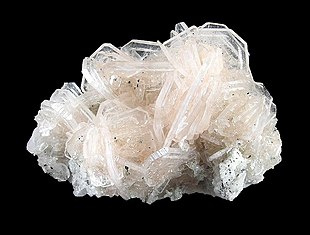 The name apophyllite refers to a specific group of phyllosilicates, a class of minerals. Originally, the group name referred to a specific mineral, but was redefined in 1978 to stand for a class of minerals of similar chemical makeup that comprise a solid solution series, and includes the members fluorapophyllite-(K), fluorapophyllite-(Na), hydroxyapophyllite-(K). The name apophyllite is derived from the Greek ἀποφυλλίζω apophylliso, meaning "it flakes off", a reference to this class's tendency to flake apart when heated, due to water loss. These minerals are typically found as secondary minerals in vesicles in basalt or other volcanic rocks. A recent change (2008) in the nomenclature system used for this group was approved by the International Mineralogical Association, removing the prefixes from the species names and using suffixes to designate the species. A subsequent nomenclature change approved by the International Mineralogical Association in 2013 renamed the minerals to include both suffixes and prefixes, as shown above.more