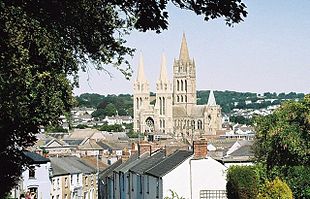 Truro (/ˈtrʊəroʊ/; Truru) is a cathedral city and civil parish in Cornwall, England, UK. It is Cornwall's county town and only city, as well as being its centre for administration, leisure and retail. Its population was recorded as 18,766 in the 2011 census. People from Truro are known as Truronians. Truro grew as a centre of trade from its port and then as a stannary town for the tin-mining industry. It became entitled to be called a city in 1876, with the founding of the Diocese of Truro, and thereby became mainland Britain's southernmost city. Places of interest include the Royal Cornwall Museum, Truro Cathedral (completed in 1910), the Hall for Cornwall, and Cornwall's Courts of Justice.more