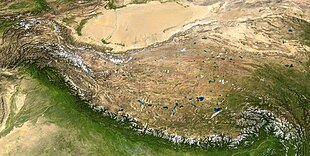 The Tibetan Plateau (Tibetan: བོད་ས་མཐོ།, Wylie: bod sa mtho), also known in China as the Qinghai–Tibet Plateau or the Qing–Zang Plateau or as the Himalayan Plateau in India, is a vast elevated plateau in Central Asia and East Asia, covering most of the Tibet Autonomous Region, Northwestern Yunnan, Western half of Sichuan, Southern Gansu and Qinghai provinces in Western China, Indian regions of Ladakh and Lahaul and Spiti (Himachal Pradesh) as well as Bhutan. It stretches approximately 1000 km north to south and 2500 km east to west. It is the world's highest and largest plateau, with an area of 2500000 km2 (about five times the size of Metropolitan France). With an average elevation exceeding 4500 m and being surrounded by imposing mountain ranges that harbor the world's two highest summits, Mount Everest and K2, the Tibetan Plateau is often referred to as "the Roof of the World".more