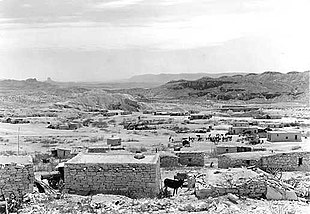 Terlingua (/tərˈlɪŋɡwə/ tər-LING-gwə) is a mining district and census-designated place (CDP) in southwestern Brewster County, Texas, United States. It is located near the Rio Grande and the villages of Lajitas and Study Butte, Texas, as well as the Mexican state of Chihuahua. The discovery of cinnabar, from which the metal mercury is extracted, in the mid-1880s brought miners to the area, creating a city of 2,000 people. The only remnants of the mining days are a ghost town of the Howard Perry-owned Chisos Mining Company and several nearby capped and abandoned mines, most notably the California Hill, the Rainbow, the 248, and the Study Butte mines. The mineral terlinguaite was first found in the vicinity of California Hill.more