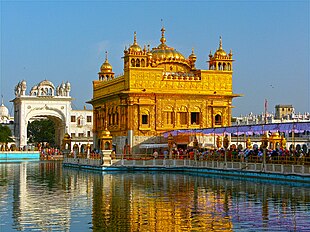 Punjab (/pʌnˈdʒɑːb/, [pənˈdʒaːb]) is a state in northern India. Forming part of the larger Punjab region of the Indian subcontinent, the state is bordered by the Indian union territories of Jammu and Kashmir to the north, Chandigarh to the east, the Indian states of Himachal Pradesh to the north and northeast, Haryana to the south and southeast, and Rajasthan to the southwest. It is bordered by Punjab, a province of Pakistan to the west. The state covers an area of 50,362 square kilometres (19,445 square miles), 1.53% of India's total geographical area. It is the 20th-largest Indian state by area. With 27,704,236 inhabitants at the 2011 census, Punjab is the 16th-largest state by population, comprising 22 districts. Punjabi, written in the Gurmukhi script, is the most widely spoken and official language of the state. The main ethnic group are the Punjabis, with Sikhs (57.7%) and Hindus (38.5%) as the dominant religious groups. The state capital is Chandigarh, a Union Territory and also the capital of the neighbouring state of Haryana. The five tributary rivers of the Indus River from which the region took its name are the Sutlej, Ravi, Beas, Chenab and Jhelum rivers; the Sutlej, Ravi and Beas rivers flow through the Indian Punjab.more