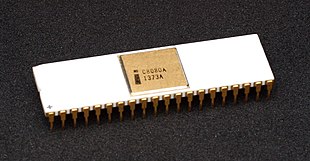 The Intel 8080 ("eighty-eighty") is the second 8-bit microprocessor designed and manufactured by Intel. It first appeared in April 1974 and is an extended and enhanced variant of the earlier 8008 design, although without binary compatibility. The initial specified clock rate or frequency limit was 2 MHz, and with common instructions using 4, 5, 7, 10, or 11 cycles this meant that it operated at a typical speed of a few hundred thousand instructions per second. A faster variant 8080A-1 (Sometimes called the 8080B) became available later with clock frequency limit up to 3.125 MHz.more