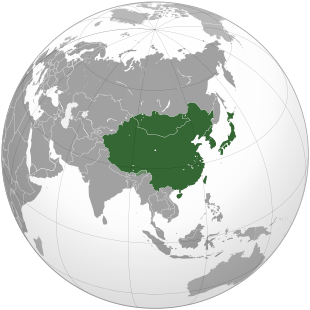 East Asia is the eastern region of Asia, which is defined in both geographical and ethno-cultural terms. The modern states of East Asia include China (People's Republic of China), Hong Kong (SAR of PRC), Japan, Macau (SAR of PRC), Mongolia, North Korea (Democratic People's Republic of Korea), South Korea (Republic of Korea) and Taiwan (Republic of China). The East Asian states of China, North Korea, South Korea and Taiwan are all unrecognized by at least one other East Asian state due to severe ongoing political tensions in the region, specifically the division of Korea and the political status of Taiwan. Hong Kong and Macau, two small coastal quasi-dependent territories located in the south of China, are officially highly autonomous but are under effective Chinese sovereignty. North Asia borders East Asia's north, Southeast Asia the south, South Asia the southwest and Central Asia the west. To the east is the Pacific Ocean and to the southeast is Micronesia (a Pacific Ocean island group, classified as part of Oceania). Vietnam is also considered to be a part of the East Asian cultural sphere due to its cultural, religious and ethnic similarities.more