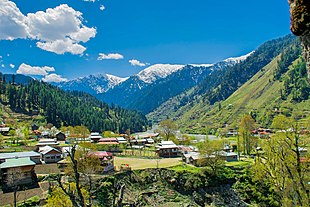 Azad Jammu and Kashmir (آزاد جموں و کشمیر, ), abbreviated as AJK and colloquially referred to as simply Azad Kashmir, is a region administered by Pakistan as a nominally self-governing jurisdiction, and constituting the western portion of the larger Kashmir region which has been the subject of a dispute between India and Pakistan since 1947. The territory shares a border to the north with Gilgit-Baltistan, together with which it is referred to by the United Nations and other international organizations as "Pakistani-administered Kashmir".Azad Kashmir is one-sixth the size of Gilgit-Baltistan and constitutes part of what is Kashmir proper—a valley divided between Indian and Pakistani control in which the majority of the ethnic Kashmiri population lives. Azad Kashmir also shares borders with the Pakistani provinces of Punjab and Khyber Pakhtunkhwa to the south and west, respectively. On the eastern side, Azad Jammu and Kashmir is separated from the Indian union territory of Jammu and Kashmir (part of Indian-administered Kashmir) by the Line of Control (LoC), which serves as the de facto border between India and Pakistan in Kashmir. The administrative territory of Azad Jammu and Kashmir (excluding Gilgit-Baltistan) covers a total area of 13297 km2, and has a total population of 4,045,366 as per the 2017 national census.more